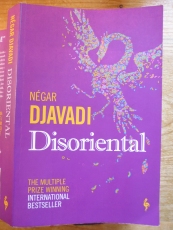 kaleidoscopic account of the writer’s Iranian family and their flight to France to escape political persecution. Published first in France in 2018 as Désorientale, it’s been brought to an English readership in a superb translation by Tina Kover and is currently shortlisted for the Warwick Prize for Women in Translation. The title reflects the narrator’s own experience of landing in a foreign country: you’re asked to integrate, but you’ve first got to separate, detach, dissociate from your own country. Arriving in France at the age of 10 after crossing the mountains on horseback, this is Kimiâ’s story-the story of finding her place in a very different, Western, society while recognising, connecting with and exploring her Iranian cultural and family heritage.

The contrast between the two places is there from the beginning.The story starts with the narrator in the waiting room of Cochin Hospital in Paris, a treatment centre for infertility, where the French couples are waiting to be seen in an atmosphere of thick silence, politely ignoring their fellow patients. If this were Iran, the narrator says, the place would be a caravanserai, a chaos of chat, discovered family connections, gossip and take out food. It’s from this hospital waiting room that the narrator tells her family stories, weaving tales of her father’s family, the Sadrs, from Mazandaran in the North East of Iran, into her account of fertility treatment in France. This is no chronological account, as we’re warned at the beginning, even the family history switching between her grandparents’s stories, and the stories of her parents, Darius and Sara. And this interweaving seems to underline the co-existence of the old and the new in Iran: grandmother Emma, reading the coffee grounds, believing in Fate, sticking to her own theories of genetic inheritance, while global discoveries in genetics enter the discourse in Iran in the 60s as elsewhere.

From the family stories emerges the story of Darius, the narrator’s father. He rejects the expectations of his conservative, authoritarian father, and flees to Paris as a young man, escaping his law course and an arranged marriage. He lives there for 10 years and it is from this experience that the family’s great love of all things French is born. He returns to Iran, a reader, thinker, journalist and political activist and marries Sara, a teacher. I hugely enjoyed these sections dealing with their family life in the 60s, which illustrates that mixture of modernity and tradition. Sara and Darius move into a new development called Mehr in Iran where they have an active social life. They befriend their neighbours, the Nasrs, with whom they share lots of new experiences, not least a viewing of the new film Emmanuelle. Both have a role outside the home- Sara is a teacher, and takes on more classes when Darius resigns from his job as a journalist. She too is a courageous champion of human rights and democracy, wearing mourning to school on the death of the populist politician Mossadegh in exile, teaching her students about him that day, for which she receives death threats.

Yet this is a society which implacably upholds many traditions, for example a rigid division of the sexes. I was taken aback at the casual mention, after Sara gives birth, of a hospital nursery reserved for baby girls. Really? Why would you see the need to place tiny infants in separate rooms according to their gender? The fact that teenage boys were sent abroad to study, leaving the girls and mothers to holiday without them, comes as less of a surprise. But this rigid gender division also leads to an absolute silence on the question of homosexuality: being gay isn’t shameful. It’s impossible. A non-reality. And the narrator is deeply saddened when, many years later in Paris, she tries to bring up the subject of her uncle, a gay man who married, and her father, Darius, the liberal democrat, can’t say the word homosexual. Yet there are advancements in sexual matters in the heterosexual world: a worldly and well travelled Iranian doctor introduces the new word vagina into discourse. While many men are puzzling about what this actually is, women in their groups are describing it, its likes and possibilities, in short articulating female desire. Yet sexual orientation doesn’t feature.

The family stories are told against a background of the history of 20th century Iran, which the narrator characterises as nothing but invasion and totalitarianism. This is a country which has always been of interest to the west for its oil and, post second world war, to the British for its strategic position close to Russia. We learn about the involvement of the US and UK in the arrest of Mossadegh and the demise of his nationalist populist government, opening the way for the Shah and, in the 70s, the Iranian Revolution and the ever tightening grip of Ayatollah Khomeini and the mullahs. The narrator defines the moment her father becomes a revolutionary as the moment in 1975 a member of SAVAK ( the National Intelligence and Security Agency) is appointed to the editorship of the newspaper he works for. Darius resigns, and later, flees to the west.

Side B of the book, referencing Kimiâ’s later role as a DJ, deals with the family’s life in France (and we’re reminded in a footnote that some Side B tracks did make good in the end-think Gloria Gaynor’s I will survive). The misery, isolation and depression felt by Darius and Sara in exile is well evoked, as well as the ignorance and discrimination suffered by the narrator and her two sisters, Leila and Mina: In the early 1980s the French didn’t really differentiate between us and the hezbollahis. Mina becomes a different girl, refusing to go to school and only making it to her baccalaureate exams because Sara pulls her out of bed, pushes her into the shower and out of the door. Kimiâ responds in a different way: she discovers punk music and a whole scene of young people dressing and living in a particular way in which her difference and foreign-ness is unnoticed and irrelevant. She becomes totally alienated from her family, leaves home and lives in a squat- (though still goes to school and passes her bac). She then spends several years as a young woman living in Brussels, Berlin and Amsterdam, DJing in clubs, exploring relationships before returning to Paris and, eventually, the Cochin clinic.

Disoriental is a big book: it sweeps across continents and decades, following the story of Kimiâ and her family through political and social upheaval, and giving the reader a real feel for the times. It paints a warmly vivid portrait of Darius and Sara in particular, which makes what happens to them in France all the more tragic. Kimiâ’s own story is well told, and true to many a story-telling tradition, vital elements are withheld, and I’ve chosen to honour that in this post. The whole is engagingly told in a tone which is often chatty, sometimes amused, sometimes ironic and yet which doesn’t pull its punches when it comes to the hard facts of political repression. That voice is perfectly and consistently rendered in Tina Kover’s skilled translation. This is a fabulous read, its place on the shortlist for the Warwick prize well deserved. Thank you Négar Djavadi and Tina Kover.

This entry was posted in Books in French, Books in Translation, Uncategorized and tagged Disoriental, Negar Djavadi, Tina Kover. Bookmark the permalink.

This site uses Akismet to reduce spam. Learn how your comment data is processed.